Valentino Rossi gets his first opportunity to wrap up the 2008 MotoGP World Championship this weekend in Yamaha's home race at Motegi. The record-breaking 29-year-old arrives at the Grand Prix of Japan with an 87-point lead over Casey Stoner
at the top of the standings with only four races left, meaning third
place on Sunday will be enough to seal the title even if Stoner takes
victory.

It is the first of four possible 'match-points' for
Rossi, who is aiming for his sixth premier-class title and his first
since 2005. Should he clinch it he would become only the second rider
to regain the crown following a two-year gap - the other being Giacomo Agostini, whose all-time premier-class win record of 68 was broken by Rossi at Indianapolis
last weekend. Agostini, with eight titles, is the only rider to have
won the MotoGP World Championship on more occasions than Rossi.

Motegi has not traditionally been a happy hunting ground for Rossi or his Fiat Yamaha team-mate Jorge Lorenzo
in the past. Despite scoring six podiums here Rossi has taken victory
only once, which was back in 2001 before the advent of four-stroke
MotoGP machinery. Lorenzo, meanwhile, scored just one podium at this
circuit during his illustrious 250cc career, taking third in 2006.
However, both riders head to Japan in great form, with the experienced
Italian having racked up four straight wins and the rookie Spaniard
aiming for a third consecutive podium.

For the second time in as many races MotoGP heads to a home of IndyCar racing, although unlike Indianapolis the 'Twin Ring' Motegi
was initially designed to host both oval and traditional circuit road
races. Designed in 1997 as a test venue, Motegi has modern facilities
and features a somewhat geometric track layout. The surface
traditionally offers good levels of grip without being overly abrasive
but the proliferation of second gear turns, linked for the most part by
mini-drag strips, means braking and acceleration are the main
prerequisite to a fast lap time. Rossi set the current circuit record
in 2006 with a lap of 1'47.228 on the 990cc Yamaha YZR-M1.
Valentino Rossi - "No pressure"
"So,
we have had a fantastic run of race and now here we are finally, with a
'match point' for the championship, and in Motegi once again! In 2005 I
was in the same situation but I crashed and had to wait for Malaysia to
win the title, and then last year we lost the championship in Japan. I
really would like to win in Motegi, especially as it's such an
important race for Yamaha and it would be a great reward for them for
all of the work they have done. However, we cannot put too much
pressure on ourselves and I will try to treat it like another normal
race. We have a good margin of points, but there are still four more
races so it is still not over! Everyone is very relaxed and focused, my
Bridgestone tyres and my M1 are working very well and hopefully we can
have another great weekend in Motegi."
Jorge Lorenzo - "High hopes for success in Japan"
"Japan
is an incredible country, with very different customs to those that
we're used to in Europe; I always look forward to going back there.
Yamaha have planned a series of activities for me before the race,
including a visit to the factory at Iwata, which I am really looking
forward to. It's been a year since I signed my contract with Yamaha,
but I still haven't visited their factory. I am sure it will amaze me!
Regarding the race, Motegi is the first circuit on our Pacific tour and
I have high hopes for new success there. After the two podiums of
Misano and Indianapolis, the team and I want to give Yamaha another
similar performance because this race is very important for the brand.
I trust in the work Michelin are doing with the tyres, although Motegi
is one of the few circuits at which I have never won. I did get the
first-ever fastest lap of my career there however, in 2003. I am
looking forward to the race!"
Davide Brivio - "Try to win and then see what happens"
"Of
course we go to Japan on the back of a very positive trend - four wins
in a row means we will have the support of some very excited colleagues
at Motegi! When you are on a run like this it tends to get more
difficult to keep winning because you know you can't continue forever
but we have to go to Motegi in the same spirit as we have approached
every race this year - let's just go to the track and see if it's
possible to win. Of course, we know it is important because it is the
first 'match point' and we could secure the championship. Personally,
though, I would rather think that could happen as a consequence of a
good job on our part rather than somebody else's misfortune. So that's
our first target: prepare properly for the race, try to win it and then
see what happens after that."
Daniele Romagnoli - "The whole team is on a high!"
"Yamaha
have struggled in the past at Motegi but I think this year will be
different because this year's bike is so much better than what we've
had in the past and we're confident it can work well. The whole team is
on a high after Sunday's race, we had a great team dinner with both
riders on Sunday night in Indianapolis and not only are we all backing
Valentino to win the riders' championship but we're working hard
together to win the constructors' and teams' title too. We hope Jorge
can make a big contribution to that, as he has done all season, and we
go to Japan in a very positive frame of mind. From our side of the
garage we can't help but look at the possibility of finishing third in
the championship but our real target is to have more good races, some
more podiums and maybe even celebrate one more victory before the end
of the season."
Valentino Rossi : Information
Age: 29

of course he will...he deserve it

Set to run a tribute livery to Lupin III, `the Gentleman Thief´ on Sunday, Jorge Lorenzo stole the show at Motegi with a new pole position record. When all eyes were on Fiat Yamaha teammate Valentino Rossi and reigning World Champion Casey Stoner at the A-Style Grand Prix of Japan, Lorenzo tore up the script in qualifying for a fourth pole position of his rookie MotoGP season.

On course for pole in the final minutes of the Saturday afternoon session, the Spaniard pulled another hot lap from up his sleeve to record a blistering 1´45.543 time in the final seconds of the afternoon run. Having stepped onto the podium every time that he has taken off from the front row including at the last two races- Lorenzo is a favourite for a spot on the rostrum at the track where he has only finished in the top three on one occasion.

Ducati rider Stoner will start from the front row for the ninth consecutive race, knowing that he could lose the title on Sunday afternoon. The Australian elected against a late attempt at beating Lorenzo´s marker, not emerging from his garage in the final minutes of the session.

Stoner´s future Ducati teammate Nicky Hayden was the highest qualifying Honda rider for his Japanese manufacturer´s home race, completing the frontline. The American made it two Michelin riders on the front row at a track singled out as a Bridgestone track.

World Championship leader Rossi was the first rider outside half a second of teammate Lorenzo´s time, and will start from the head of the second row. The Italian could be crowned 2008 titlist tomorrow with a podium finish, whatever happens to his rivals.

Repsol Honda´s Dani Pedrosa, another rider with a mathematical possibility of taking the title, will line up alongside Rossi, with the racewinner from the past three years at Motegi Loris Capirossi- rounding off a star-studded second line. Colin Edwards, Randy de Puniet and Shinya Nakano make up the third row for the A-Style Grand Prix of Japan.

Alex de angelis had a late crash in the session, leaving his bike on the racing line, but it was quickly removed and both he and his fellow riders were unaffected by the incident.
_________________ 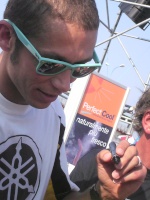